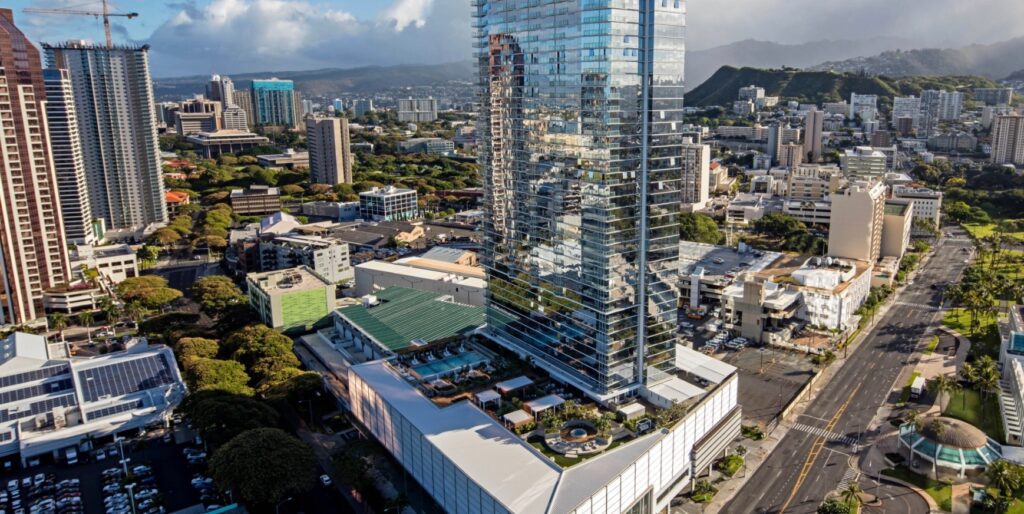 The Symphony Honolulu is a new premium condominium in Kakaako. Symphony Honolulu was built by Oliver McMillan, who also built Pacifica Honolulu. It has one, two, and three-bedroom floor designs. The building is just a few minutes’ walk from the upcoming Kakaako Rail Station, which is located on the corner of Kapiolani Boulevard and Ward Avenue. Ala Moana Beach Park is around 0.5 mile away, while famed Waikiki is about 1.7 mile away.

The building’s large floor plans are a significant feature. Every unit in the building has floor to ceiling glass windows that provide spectacular views and abundant natural light. The building’s long side runs east to west, so half of it faces mauka (Hawaiian for mountain) while the other half faces makai (Hawaiian for ocean). Every unit has wide plank engineered Oak floors, as well as open kitchens that look out over the living space. Every unit also includes Studio Becker cabinetry, Bosch appliances, and polished quartz worktops. About half of the units include small glass lanais, which are generally used for standing rather than entertaining.

Velocity will be an 80,000-square-foot retail vehicle facility with exotic car names such as Lamborghini, Ferrari, and Maserati. The ground-floor dealership will undoubtedly generate a lot of talk around the tower, bringing life to the Kapiolani and Ward Avenue intersection. The Blaisdell Concert and Exhibition Hall is located across the street, and it has hosted performances by Justin Bieber, Janet Jackson, and local favorite Bruno Mars. A weekly farmers market is held in the parking lot in front of the concert venue, with local produce and ready-to-eat food. Doraku (sushi), Chef Chai’s (upscale local asian bistro), Asahi Grill (local comfort cuisine), and Budnamujip (upscale Korean Yakiniku) are just a few of the amazing restaurants around. Ward Village is a 5-minute walk down Ward Avenue and Ala Moana Center is a 10-minute walk along Kapiolani Blvd. Ward Village has a new Whole Foods Market, which is the state’s largest Whole Foods.

Get in touch with me!

Complete the form below and I will contact you right away!

All photos courtesy of Symphony Honolulu