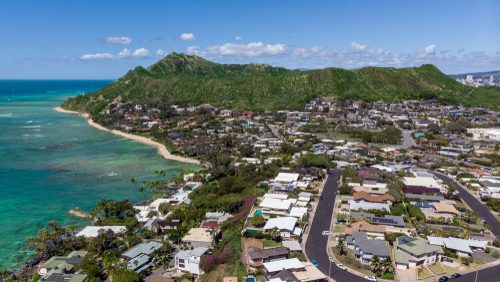 Posted at 16:11h in Hawaii Life by lauramoore 0 Comments
21 Likes

Hawaii is among the most beautiful and vibrant states in the nation, one that is popular with residents and tourists alike. It’s also considered to be one of the safer states, with an overall violent crime rate of 2.9 incidents per 1,000 people. This is lower than the national average of 3.7 incidents per 1,000 people. Honolulu in particular is considered a very safe place to live, but there are some neighborhoods that are considerably safer than others. Let’s take a look at the five safest neighborhoods and what makes them good places to live for you and your family.

Kahala is arguably the safest and most affluent neighborhood in Honolulu and even in all of Hawaii. It has a population of 49,834, but it has a remarkably low crime rate overall. This is mostly down to the fact that it is where the richest people on the island live. Luxurious mansions and oceanfront homes are common sites in Kahala, where ever teardown homes can go for around $1.5 million. It also has one of the highest-rated school districts on the island as well as amenities such as the Waialae Country Club and numerous private beaches.

You obviously need to have a lot of money to live in Kahala – especially since many homes start at around $2 million – but the area has been called home by presidents, celebrities, and several business moguls throughout the years. If you can afford it, there is perhaps no safer place to live in Honolulu.

Aina Haina is a small and affluent residential neighborhood with a population of about 18,599. It is home to some of the best public schools on the island such as the acclaimed Aina Haina Elementary School, making it a popular destination for families with young children. The average value of homes in the neighborhood is around $1 million, not inexpensive by any stretch of the imagination, but more affordable than living in Kahala. Since there are few rental properties in the area, Aina Haina is not a popular tourist destination, but it is virtually free of violent crime, and it is home to amenities such as the Aina Haina Shopping Center.

Hawaii Kai is a residential neighborhood located far east of Downtown Honolulu with a population of 28,417. It’s considered one of the safest neighborhoods on the island, and unlike Aina Haina, it is a fairly popular tourist destination thanks to its close proximity to some of Oahu’s best beaches. The median value of single-family homes in this neighborhood is around $700,000, though the area is still very affluent and maintains extremely low crime rates. The only downsides to living in Hawaii Kai are the traffic and the long commutes that many of its residents have to make every day. Since Hawaii Kai is considered to be a bedroom community, and many of its residents commute to Downtown Honolulu to work. This drive can take up to 45 minutes when traffic is at its heaviest. However, Hawaii Kai has been steadily expanding over the years, and there are many jobs available in town as a result.

Ala Moana is located between Waikiki and Downtown Honolulu and has a population of 20,035. The neighborhood is also known as Kapiolani and Piikoi, and it is considered the fast-paced area of Honolulu. While it is a relatively safe neighborhood for residents, it is even more popular among tourists, surfers, and young professionals. Most of the real estate consists of high-rise towers and luxury urban developments, but there is still no shortage of natural beauty among the more cosmopolitan amenities for those who enjoy nature. It is also the home of the Ala Moana Center, the largest open-air shopping center in the world. As with any place that attracts large crowds, the number of assaults and other violent crimes has increased around the shopping center in recent years, so visitors are encouraged to be on their guard while they shop. On the other hand, the rate of violent crime in the rest of the neighborhood is still remarkably low.

The Manoa neighborhood is located within the beautiful Manoa Valley and has an overall population of around 46,690. It has been said to have two sides. One side of the neighborhood is to the south near the University of Hawaii campus. As you could probably guess, this area is home to university students and has relatively low owner occupancy. The University of Hawaii has been ranked 74th as one of the country’s safest college campuses, but it does have a higher crime rate. North Manoa, which is located in Manoa Valley proper, is a mostly residential neighborhood filled with attractive single-family homes with median values approaching $1 million. It also has a relatively low crime rate compared to the southern neighborhood and is among the older residential neighborhoods in Hawaii. Because of this, Manoa is home to older families who have lived in the area for generations as well as retirees. Overall, Manoa is a tightly-knit community with a lot of character, making it ideal for those who want to live in a region that has a rich history. Of course, college students are more than welcome to make themselves at home in South Manoa while they attend classes at the University of Hawaii.

Are There Areas to Avoid in Honolulu?

While Hawaii is considered one of the safer states in the country to live in, there are still some places in Honolulu that should be avoided if you want to keep your family safe. Downtown Honolulu and Chinatown can both be dangerous at night. Large crowds tend to gather in these areas, and they can get rowdy. Violent crime is still rarer in these areas than in other parts of the country, but you are more at risk of being robbed if you aren’t careful. There are a lot of homeless people in that area, and they can be aggressive towards tourists.

Airport, Honolulu, Hawaii should also be avoided if you’re looking for a place to settle down on the island. It is ranked as the worst city in Hawaii to live in. Kalihi-Palama also has problems with an increasing crime rate. It is currently 84 percent higher than the national average.

Despite these areas, Hawaii is still a very safe place to live with a family. This doesn’t mean that you shouldn’t take precautions of your own if you plan to travel there, though. The rate of violent crime is very low, but property crimes and theft are still on the rise in some areas, particularly in high-population areas and the more dangerous neighborhoods that we discussed above. If you plan to travel through Honolulu, stick to well-lit, populated areas, and try to travel with a group of people, especially at night.

If you do plan to settle in Hawaii with your family and you can afford to do so, we do highly recommend the five neighborhoods we discussed above. Single-family homes can be expensive in these areas, especially if you plan to live in Kahala or Aina Haina, but it can be well worth it to experience all of the beauty and amenities that these neighborhoods have to offer. Take this guide into consideration, but never be afraid to do your own research to find a home that is best for you and your family.